The Future of Mobile and Desktop Applications 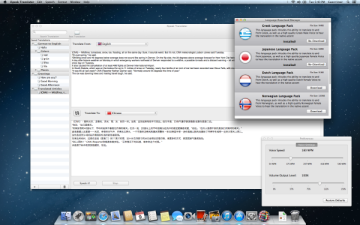 Future Apps is happy to announce the release of iSpeak Translator 1.1 for the Mac App Store. Version 1.1 finally brings the addition of all the languages we support for the iOS apps to the Mac! The app includes five pre-installed languages (English, French, German, and Italian), and you can download the twelve additional languages through our new Language Download section within the app. Users can pick and download which languages they need, without wasting hard drive space with extra languages they don’t need!
The extra languages are free of charge, you simply press the download button and your good to go! When you install the additional languages you get the same high quality HD voices you have known to love for each language. iSpeak Translator for the Mac is now and incredible bargain. You get all 16 languages, which are available separately on the iOS app store, for one incredible low price.
The update is available immediately on the Mac App store, or you can purchase the app for $4.99. Go download or update iSpeak Translator for the Mac today, and see why our iSpeak series of translators are the best translation solution on the iOS and Mac App Stores!
The 12 additional languages supported are: Arabic, Chinese, Czech, Finnish, Greek, Japanese, Dutch, Norwegian, Polish, Portuguese, Russian, and Swedish